him and me was a solo exhibition shown at the University of Winnipeg’s Gallery 1C03 from February 26 to April 4, 2015. Here’s an excerpt from the press release for the show: 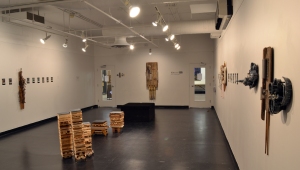 “I walk the sidewalks, streets, and back-lanes of my native Winnipeg. My goal is to walk all of them…”

him and me is a solo exhibition by local artist Peter Tittenberger that reflects the diverse nature of his practice over the last 35 years. The show features a selection of Polaroid photographs processed in 1979 and recently collaged, new non-functional ceramics, and sculptural works made of reclaimed wood and other found objects.

Tittenberger’s obsessive activity of traversing each street in this city, and his accompanying habit of collecting and creatively re-using some of the discarded objects he discovers along the way, result in works that reveal something about the specificity of this place and of what the artist considers his “make-do attitude and immigrant aesthetic.” He notes that “it is an attitude where what you can find to use is more important than what you can buy to use – where compromise is a given, perfection is an elusive goal, and where alternative uses are as valid as intended ones. It is an attitude and an aesthetic that underpins life in the North End as I have witnessed it over my lifetime living there.”